«Keeping pace with the times»

Facts worth knowing and current news directly from the industry. We will gladly inform you once a month.

From the Black Forest, Germany to the Zugerland, Switzerland

The company history of ABNOX AG began on 18 July 1946. But the predecessor company in Central Switzerland was already producing grease guns in the 1930s. You can find out what this has to do with a Black Forest goddess of hunting in this article on the company’s 75th anniversary.

ABNOX AG is celebrating its 75th anniversary this year. However, the history of the central Swiss system partner for integrated processes in dosing, lubrication and clamping technology goes back another 17 years. August Kaltenbacher founded an electroplating institute in Zug as early as 1929. Just two years later he started manufacturing grease guns – already under the brand name “ABNOX”. He had bought the patent from a German inventor, from whom he is said to have drawn inspiration for the manufacture of grease guns during an earlier hiking trip in the Black Forest.

Back to Switzerland: In the 1930s, the company grew from a sole proprietorship to a sizable SME. When in 1938 the factory became too small for around 30 employees, the company moved to the premises of the former Indukta watch factory in Zug. Five years later, operations were relocated to the former Milchsüdi halls in nearby Cham, where even around 80 employees were employed in 1945.

However, financial reasons prompted August Kaltenbacher to sell the company to Heinrich and Julie Sandmeier. On 18 July 1946, the couple founded the lubricating press factory ABNOX AG and continued their traditional activities. In addition, high-pressure hoses and grease nipples were added to the production programme shortly afterwards, and thus in the coming decades ABNOX developed into the leading international technology company with extensive expertise. Customers from a wide variety of industries all over the world benefit from the special know-how and experience in all aspects of dosing, lubrication and clamping. If we look at the 75th anniversary and the history we have just described, the tried and tested MURALT hand lever press has been in service for 90 years.

By the way: did you know what, besides ABNOX, also connects the two historical locations with each other? Both the canton of Zug and the mountainous region of the Black Forest have a cherry cake tradition. Whether this has made its contribution to creativity and innovation is anybody’s guess ...

The official ABNOX story from 1946 can be found here: 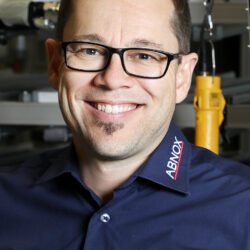 «Keeping pace with the times»

Facts worth knowing and current news directly from the industry. We will gladly inform you once a month.